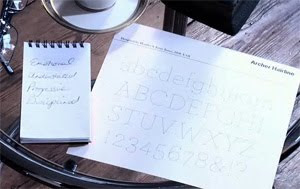 When I came upon this fun, holiday quiz, What Type Are You?, from the folks at Pentagram Design, I couldn't resist giving it a try. I was curious to see just how accurate they'd be in matching my personality to a particular type face. After a series of four simple questions, they analyzed my answers, and pegged me as an "Archer Hairline" type of gal. The font is quiet, simple but elegant, with surprising details revealed when scrutinized more closely. I have to say, that does suit me.

Give it a try here (the password is: character) and find out your true type!

The above image is a screen-grab of my "diagnosis," courtesy of Pentagram (thanks, Pentagram!)
Posted by Kimberly at 1:36 PM No comments: 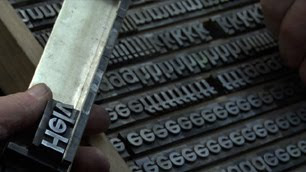 It's no secret; I love type. There's something about letterforms that I find absolutely mesmerizing. As a I child, I would spend hours pouring over type specimen books, drinking in their subtleties of form. And my favorite was always Helvetica.

Later on, when I was off at college studying typography, I learned that Helvetica was the favorite of a lot of other folks, too. In fact, its use is "universal." (Pardon the pun, typophiles. :)

Think you DON'T know Helvetica? Check out this PBS short video: Helvetica. It's actually a clip from a movie about the type face. (See? I told you there were a lot of other Helvetica enthusiasts out there!)

Think you DO know Helvetica? Try this fun game, where designer David Friedman found 20 logos originally designed with Helvetica and swapped them out with Arial (blasphemy!). Your job is to pick out the original. Have fun! (I got a perfect score! How about you? :)
Posted by Kimberly at 8:00 AM 2 comments:

FOR THE LOVE OF WINTER 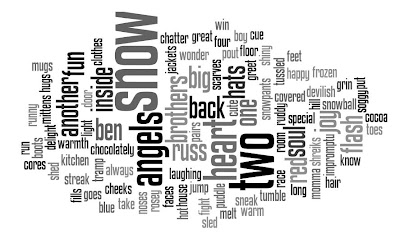 a flash of red,

a shiny sled goes by

they jump to their feet

and race back up the hill

to take another run

another streak of red, a flash of blue


(so cute, with rosy cheeks)

i sneak inside the house,

it won't be long


before they tramp inside with frozen toes

and shed their clothes:

and two pairs of boots,

and snowpants, and jackets, and hats, and scarves,

in one great puddle

on the kitchen floor

i greet them at the door

of cocoa to warm their cores

momma, ben put snow down my back,

says russ, with a chocolaty pout;

from ben, a devilish grin—

the room with warmth,

my heart with joy;

each one is such a special boy

with ruddy faces and tousled hair

they melt my heart,

they light my soul

i wonder
if they know,

Note: The typographic cloud graphic above (my "snow cloud," if you will) was created with a wonderful (but addictive) program called Wordle. The poem, by yours truly, harkens back to a snowy day—a very long time ago...

Posted by Kimberly at 8:00 AM No comments:

My Kind of Humor 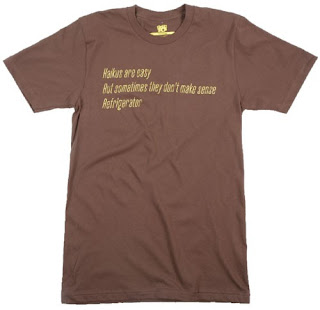 
Get your type tee here!

Posted by Kimberly at 7:46 AM No comments:

RESURFACING
It looks as though I kinda fell off the face of the earth some time in late August.

That sounds about right, time-wise, given the fact that, in early September, my cardiologist started talking to me about open-heart surgery (a septal myectomy, to be exact) as the next step in trying to get a handle on the severe symptoms—shortness of breath, dizziness, extreme fatigue, and lack of stamina—I'd been experiencing for the past couple of years. Seems as if my heart condition (a genetic one, called hypertrophic cardiomyopathy or HCM) was getting worse and worse, and seriously affecting my quality of life.

Well, long story short, after a roller-coaster of an emotional ride trying to figure out what I should—HAD!—to do, I underwent surgery in early November, and am now recuperating—slowly but surely. I hope to post more on my experience in the weeks ahead. Until then, please know that it's good to be back (to be alive!) and I'm looking forward to all the possibilities the future might hold.

AND SEW ON, AND SEW FORTH 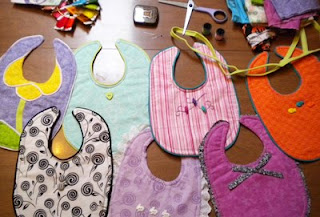 My niece, who just moved to Johannesburg, is expecting her first baby, a girl, Liliana Grace. She's asked her relatives stateside for homemade items for the baby; something small and easy to stuff into a suitcase. (It's really expensive to ship stuff to South Africa!)

Now, we are a crafty, creative bunch for sure. As I type: my step-mom is making a quilt; my sister is "crocheting like a madwoman" as I understand it, working on a little oufit; my brother, cabinet-maker extraordinaire, is working on a wooden box which I'm sure will be a treasured family heirloom some day; a couple of my neices are working on blankets; and my other sister (the grandmother-to-be) is sewing everything under the sun—except for baby bibs, 'cuz that's what I promised to make. (She is a professional seamstress, and costume designer, and has the most amazing fabric stash I have ever seen! But since she's in FL and I'm in NH, I had to hit up the fabric store...)

My goal was simple: I had eight weeks to make seven bibs, one for each day of the week. But then, after drooling over all those "quilter's quarters" at the fabric store, and having a tough time narrowing my selection down to only seven prints, I decided I'd make the bibs reversible, and picked out 14 instead. I figured I could mix and match the left over scraps for appliques, ruffles, and such. I didn't have a pattern, so I bought an 89 cent bib, scanned it into my computer, and traced it in Illustrator. I added a seam allowance and printed out a template. I was ready to roll....

My head was swimming with ideas, so I dove right in. Now, I am no professional seamstress, and sometimes my creativity gets the best of me on projects. On the first bib, I got totally carried away making applique flower petals at the neckline (so when it's on, the baby's head looks like the center of a flower). It is so-o-o cute, but it took me three weeks to complete! (I don't have a whole lot of spare time between running a business, chairing a non-profit, planning a remodel of a second home, and basic family & household obligations....)

Okay, so three weeks for one bib meant I only had four weeks to complete the other six! My weekly bib quota had suddenly gone wa-a-y up! No problem (as long as there are 24 hours in a day, I still had plenty of time...). I dragged those bibs cross-country to LA with me last month—and down to Long Island, too—and they've been back and forth to the Lakes Region several times. By the time I ship them to FL, and then my sister carries them to Africa, they will be some well-traveled bibs indeed. 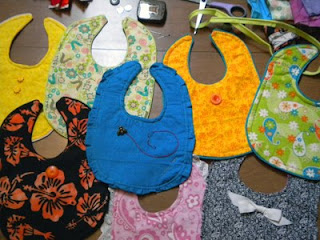 Down to the Wire

Well, there's only one week left now, before my sister flies off to Africa with her second suitcase stuffed with baby gifts, and I am still not finished with the bibs. (And I still have to ship them down to her in FL, too!) I have been pulling all-night sewing sessions this week, staying up into the wee hours of the morning. Last night, I was finally able to pack away the sewing machine, and finished slip stitching all the openings. All that is left are the embellishments and Velcro closures. (I continued to get carried away on a couple of other designs—adding embroidery, ruffles, bows, etc.—but the last four are decidedly PLAIN. Such a shame, as I had SO many more ideas!) I found some nifty buttons to dress the last ones up a bit, so they'll look nice, too. Of course, four bibs actually means eight sides because they're reversible—me and my brilliant ideas!—so I've still got a lot of hand-sewing to do, but I think I'm going to make it.

People just better not look too closely at the handiwork (as I said before, I'm no seamstress). I'm hoping that they won't fall apart in the wash! But I figure, I'm sending seven of them, so the odds are with me that a few will withstand the test of time anyway. And one thing's for sure: Baby Lily will be the best-dressed little drooler in Jo-burg! :)

Can I Get Bacon with That? 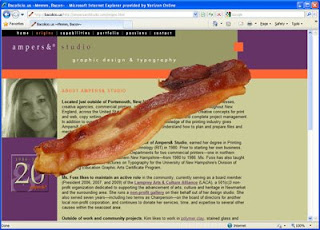 Who doesn't love bacon? (Well, I know a couple of people who don't, but I always tell them they're crazy….) I even wrote a short story about bacon once—actually bacon and religion, if you can believe it. It was an excercise for a writing class I was taking. (Sorry, but I'm not quite ready to share that here, folks. Maybe some other time…)
A Virtual Side of Bacon
Anyway, when you visit bacolicio.us, you'll see how easy it is to add a rasher of bacon to your favorite website—too much fun! (Go ahead, give it a try. It only takes about as long as zapping a strip or two of that pre-cooked stuff in the microwave does.) Now if they could only capture that smell somehow…mmmm, bacon!
PS: For you true bacon enthusiasts, check out Bacon Today! :)
Posted by Kimberly at 10:20 AM 2 comments:

Kimberly
NH Seacoast, United States
I am a freelance graphic designer, a self-professed typophile, a book worm, and a volunteer director/curator of a non-profit art gallery. I hope to share, with visitors to my blog, the inspirations which continue to fuel my lifelong love of art and design (and any other musings of my choice). Enjoy!